Home  »  Organic food industry booming – and that may be bad for consumers - Certified C.L.E.A.N. / Certified R.A.W. »

Organic food industry booming – and that may be bad for consumers

As organic food shifts from utopian movement to lucrative industry, a war is being waged for its soul.

Record organic sales in the United States totaled nearly $50 billion in 2017 according to the Organic Trade Association. Although organic food still represents only 5.5 percent of food sold, its year-over-year growth has been meteoric – taking a cue from conventional agriculture’s mantra: “Get big or get out.”

This has resulted in organic growers and food companies that, although technically adhering to the definition of organic – no chemically formulated fertilizers, growth stimulants, antibiotics or pesticides – are a far cry from the idealism and high standards with which the movement began. 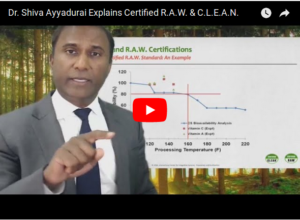 If you are a food manufacturer, please submit the form below. We will get in touch with you to help you understand what you need to do if want your food to be Certified R.A.W or Certified C.L.E.A.N.

Certified C.L.E.A.N. and Certified R.A.W. are projects of International Center for Integrative Systems, an ANSI member and a 501(c)(3) not-for-profit organization